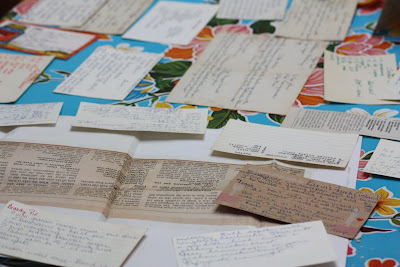 I am a bona fide, true blue, thriftaholic, garage-estate sale-ing, street scrounging pack rat. Drives the DF nuts. I can't help it. There is nothing I would rather do than sift for precious nuggets of discarded goodness hidden in the massive mounds of crap that fill our wealthy urban environs, a veritable goldmine for us bottom feeders. In a city where the rivers of unwanted junk flow like a flooded mountain stream after a spring snow melt, you must have rules, otherwise you would end up buried under an avalanche of your own making like on that TV show about hoarders that I can't quite muster the courage to watch. Contrary to what my DF might tell you, I don't bring just any stray knick knack into my house. Like I said, there are rules.
Last week I broke the rules. On the walk home from picking up my daughter at school, I stumbled on one of those recipe collecting folders, lying on the sidewalk in a pile of mildewing clothing and random papers and books that were sullied beyond recognition. It had a great cover, circa 1981, of a country kitchen still life, complete with rolling pin and wire egg basket. How could I resist? Well, other than the fact that the folder and its contents were a touch damp from all the rains we've been having. I knew that taking this musty booty home would violate at least two of my above rules, but when I saw that most of the recipes contained real food ingredients rather than a load of processed, canned crud, I snatched it up and brought it home to air out.

I pulled out the limp recipe cards with the kind of care reserved for handling antiques and spread them around the dining room and kitchen. What a find! As I meandered through the culinary world of this unknown soul who had discarded these recipes with as much thought as one might give to junk mail, I was struck by a pang of guilt as if I had stolen something that wasn't rightfully mine. All of these handwritten cards, yellowed with age and stained with use, seemed so intimate and personal. I inherited my grandmother's old, spill-splattered recipes and I treasure them above all of my cookbooks combined. They tell the story of the daily life of my family at a time when I was not around to share in the eat, drink, and conversation. These recipes are a soupcon of a glimpse into that world. I know what my grammy liked to cook based on how thick of a coating of batter is stuck to the page. It's a small thread connecting me to a person that I didn't have a lot of time with in this life. When I use my grandmother's recipe books, I feel as if I am cooking with her or touching some part of her and her life that is now gone.

So from where I'm standing, I can't figure out why someone would dump a bunch of well loved recipes in the street like a used tissue. Aren't other people the least bit sentimental for old family dishes or am I just corny that way? Well this eggnog pie looks positively delish so I'm more than happy to be an overly schmaltzy kind of gal if this personality quirk scores me some quality sh*#. 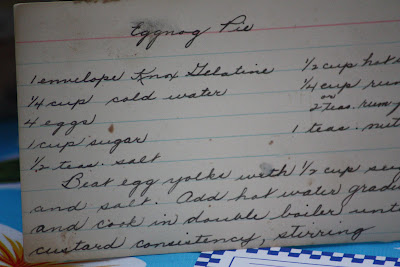 How about a lamb and lentil soup with beer? 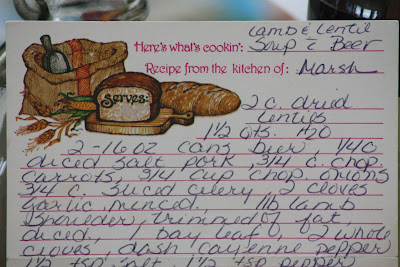