Tragedy on the Farm

It was a sad morning here at the Itty Bitty Farm. We hadn't even had the chickens a week when we lost one to the bitter cold and windy San Francisco spring. Broccoli (nicknamed Bawk-li) was probably too young to be outdoors, even with that light in the coop. We were told that she was about 5-6 weeks old and were assured that she would do fine outside as long as she had a protected box to escape into, but I suspect that she was more like 4 weeks and therefore would have needed a constant 75 degrees to be comfortable. Miss Lorraine and Pearl are more like 8-10 weeks and can handle our spring dips in temperature.

Though Broccoli seemed to be eating and drinking and running about in normal chickish fashion, she was showing signs of "pasting up". This quaint little term refers to what happens when chicks get the runs as a result of being under stress or too cold. The runny stools stick to the down around their pooper and can eventually completely seal them shut. I checked Broccoli's backside post-mortem and feces were stuck to the down, but she wasn't closed off. My suspicion is that she may have been runty, not as strong as the other chicks, and probably could have used a heat lamp or nights spent inside the garage. So I guess all that peeping wasn't just plain chattiness (which I had read is a characteristic of the Houdan); it was really a cry of "I'm freakin' cold! Could you do something about this?" Oh my God, I'm a terrible mother to my poor chickadees! I'm a chicken killer!!!!!!!

Ok, I need to get a hold of myself here. The authors of the book Chickens in Your Backyard say that random deaths can occur in the healthiest of flocks. This may not have been completely my fault. Broccoli could have been weak, and me being an inexperienced hen hostess failed to notice the subtle signs. AND the chicken lady we bought her from said she would be fine outside. Maybe fine in Cotati, but definitely not fine in our breezy corner of the Bay Area. I've learned my lesson. Pearl and Miss Lorraine are enduring daily butt checks. I'm so sorry Broccoli! May you rest in peace.

Ute was quite distraught over the loss of her dad's peep. She was inconsolable for a solid 15 minutes, which is like a lot for a 5 year old. She insists that Esteban get another chicken that looks just like Broccoli. Our dilemma, I believe, is that we will need to get 2 more ladies as it is never a good idea to introduce just 1 chicken to a flock. That's just asking to be witness to the unpleasantness that is chicken cannibalism. Perhaps we'll try our luck with a brooder and get a couple tiny things. That way we can get a Spitzhauben, the mohawked Swiss national chicken, and an Amerucauna, known as the Easter Egger for its green eggs, which were the breeds that I had originally wanted but the chicken queen didn't have any (they came in a few days ago). Stay tuned for pics of building the brooder.

For now, here's a pic of the run that I finally completed. 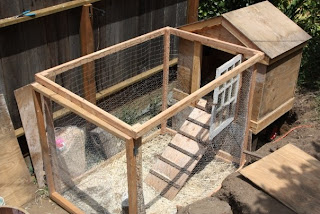 I probably took out more nails than I put in, built the door a bit off kilter, which will need to be planed, and used too many different types of mesh / chicken wire giving the whole thing an aesthetically mottled look, however I don't think it's half bad for my first project that I built completely on my own. You should have seen me work that chop saw like a real pro! As reward for my efforts? Dry, cracked, bruised, cut, dirt encrusted man hands. There goes my career as a hand model... *sigh*.
Posted by Heidi at 8:02 PM 1 comment:

After a solid year of chattering non-stop about chickens, I bet many of you thought they would never arrive. Oh ye of little faith. We so got those chickens and they're in our semi landscaped, fenceless backyard right this very second. Don't believe me? Stop by for a visit and meet our lovely ladies for yourself. Don't live close enough? No problem. Check out these chick pics!

Here is Ute's hen, Pearl Karina. She's a Cuckoo Maran who will look much more beautiful when she is full grown. And she comes with the extra perk of laying "chocolate" colored eggs.

My lady, the biggest of the clutch, is a Welsummer and will also lay dark brown eggs. I call her Miss Lorraine.

And finally, here's the whiniest of the

chickadees, Esteban's baby Broccoli. She's a Houdan, has five toes, and will grow up to be quite a looker with that tussle of feathers on her head. If you ever wondered what Esteban's hair looks like in the morning, take a gander.

We had planned to get the chickens at 10-12 weeks, but when Ute and I ventured up to the Chicken Queen's Poultry Palace in Cotati, she only had wee peeps in the breeds we were looking for. Thank goodness we've got a 4-sided coop and a warm light now that we've moved into our dismal, cold San Francisco summer. 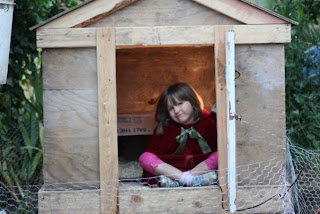