Like most gardeners, I have a surplus of seed from years past. So I went easy in my ordering this time around. I only purchased from one company, my favorite, Baker Creek, and chose a small handful of things I have been eager to try. Here's this year's highlights.

Streamline and Scarlet Runner Beans - I've never had too much luck with beans around here. The summers are never hot enough to get really strong plants before the pests come in. Runners like cooler weather so we'll see if that does the trick.

Pepino Melon  - There's a lot of debate about how well this eggplant relative, native-to-the-Andes plant can grow in the Northern Hemisphere. It requires a long growing season, but tolerates cooler weather. I'm figuring since chayote, another Andean native, grows like a weed here, the pepino should do about the same. I'm also curious about the taste, which is said to be melon-like. I'll let you know. And btw, the chayotes that I put in last year grew phenomenally well.

Chinese Lantern Gigantea - Similar to ground cherries and tomatillos, this plant produces a husked fruit that can only be eaten when fully ripe. The husks are bright orange, which I think will be a gorgeous addition to the foliage on the farm. I've had great luck with ground cherries in the greenhouse and am not sure how these will fair in our cool summer.

Cucumber Dragon's Egg  - Yeah, I bought these because of the name. I'm a sucker for anything with the word "dragon" in it, like the Dragon Tongue bean from Baker that is oh so groovy colored and tasty. This variety of cuke, developed in Croatia, is said to be bitter-free. I have found that most varieties that produce well in Russian-ish areas, do well in San Francisco.

Mexican Sour Gherkin - These guys look like tiny watermelons and have a lemony flavor. I thought they might make interesting pickles. Also they have a 70 day growing season, which is just the right amount of time to fruit in our short summers.

Little Green Eggplant - Usually eggplants require a tremendous amount of heat to produce well. This is another Russian variety that might work in cooler summer areas. Fingers crossed. I would love to get an eggplant to fruit here.

Lemon Basil  - Well this one just sounds amazing, doesn't it? Who wouldn't want a hint of lemon in their pesto? This variety received rave reviews on the Baker Creek site. I can't wait to see how it does and what it actually tastes like.

Are you growing anything interesting or new this year?


- Posted using BlogPress from my iPhone
Posted by Heidi at 11:15 AM 12 comments:

Valentine Goats: They're in the Mood for Love Simply Because I Said So

After using up the last of my frozen goats milk, I realized that if I ever wanted to have it again I would need to get somebody knocked up. I dried off Lucy at the beginning of December since her production had gone down to a cup and a half per day, which didn't seem worth the effort anymore. She had a great run though. Usually goats stay in milk for 10 months; Lucy went 15.

This time around, I really want to get Ethel preggers. She has failed to settle (conceive) twice now, once with a buck named Flapjack in Lake County and once with Lucy's son, Fred. In order to boost the girls' fertility, I gave them both an injection of BoSe, a selenium and vitamin E cocktail that is said to regulate the lady goat cycles. I then sent them off to Prundale where Fred now resides.

Remember Fred? He is such a manly man now, I hardly recognized him. Isn't he gorgeous? 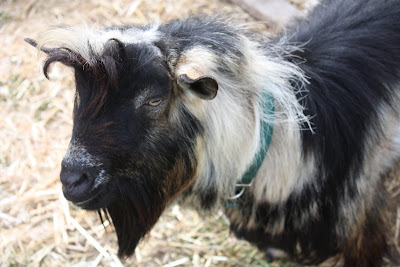 Fred is as wily as he has always been, if not more so. For a period of time, he lived with Pam of Peaceful Valley Farm along with his sister, Ginger, but he kept busting out of all the fences. Pam re-homed him to Leslie's little farm in Prunedale, where he continues his escapades of breaking fences and entering places he doesn't belong, like Leslie's house... and in her bed. Nice, Fred. Real nice.

I wanted to give Fred one more go with Ethel as I thought they would make some cute babies together. Ethel has been acting like she has been in heat for about two months straight and as soon as we arrived at the farm, Fred was VERY interested in her. So interested that he didn't even recognize his own mama. Have you ever seen a goat buck woo? The courtship involves a lot of knickering, tongue waggling, and raspberries (a.k.a. the Bronx cheer) being blown all about the doe's face and neck. Here's Fred off to a good start 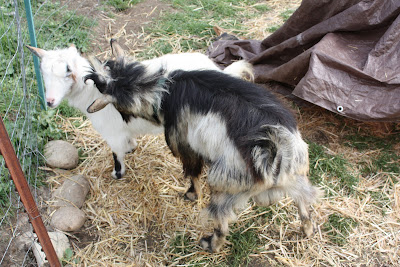 By the time I left, Fred had given it to her at least 10 times in less than 20 minutes. Poor Ethel was done by that point, as can be seen here 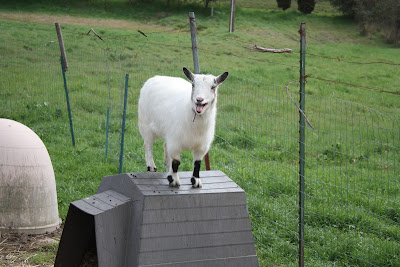 Can't you just hear her crying "Help, get me away from that sex maniac!"? Too bad, lady. You need to make some babies!

While Ethel and Fred get busy, Lucy's intended is this gorgeous white pygmy (possibly a Nigerian cross), Ozzie. Here he is with Leslie. Is he not the most adorable buck you have ever seen? 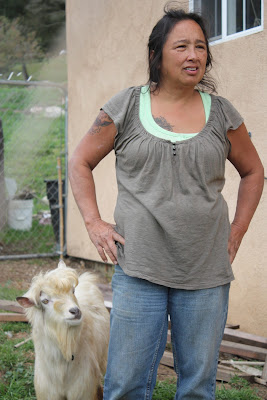 The hair kills me. I immediately nicknamed him Ozzball. 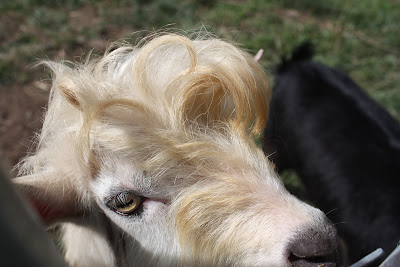 Well let's hope the girls make some good love connections. We are desperate. I am now having to *gasp* buy milk from the store.