This time of year in the greater Bay Area, you can't swing a dead cat without hitting a pumpkin patch. There's Farmer John's, the Great Pumpkin Patch, Lemos Farm, Arata's (that really great one that has a giant hay bale maze and real live sword fighting), and dozens more littering the highways and bi-ways of our neck of the woods. And of course we have so many since this IS home to the the mother of all pumpkins, the Atlantic Giant, which can weigh in at well over 1000 pounds. Anyone with a kid will find themselves making the yearly trek to one of these festively orange carpeted bonanzas of squash delight. Ironically, I have yet to grow my own pumpkin. It's not like I haven't tried. But something always seems to go wrong. So our little clan joins the hoards in this yearly pilgrimage to pay homage to the gourd.

And what a mighty gourd it is! 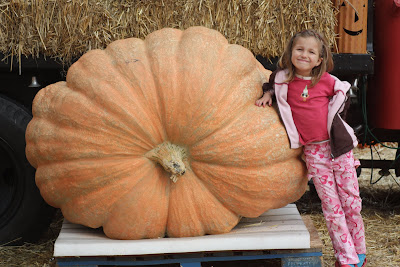 As I write this, Gertrude's stiff little body is on its way to the California Animal Health and Food Safety Laboratory at UC Davis. After 3 days of hobbling around the coop mostly paralyzed, using her wings, haunches, and beak to ambulate, my beautiful Brabanter finally passed. Ever since Violet and Petunia met their maker, I had planned to send the next chicken that died off to be tested. I found out that UC Davis provides this service for free to folks who own less than 500 birds. Since these tests can be quite pricey if performed by a private lab, I was more than relieved to find out my pocket book wasn't going to continue to take a beating when it came to the chickens. A few plastic bags, a cardboard box, some gel freezer packs and a Jackson to Fedex were all it took to get Gertrude on the way to her necropsy (animal autopsy).

A few folks have expressed concern about the method of shipment, particularly with the unpleasant possibility of leakage. To everyone who has been worried for the poor folks who deliver packages (and I'm sure they thank you for your concern), that's what the plastic bags were for. I, too, was a bit uneasy with shipping a corpse, but apparently people do this kind of thing all the time. According to the lady at CAHFS, "You can send it Fedex and don't worry, you don't have to tell them what you're shipping." Phew! Though just to be sure, I did double bag the bird with extra large plastic bags which wrapped around the chook's thin frame a couple times. In the end, it was more like a quadruple bagging.

The exchange with the man at Fedex was a touch... odd. He wanted me to change boxes. I told him it was impossible; the box was carefully packed. "It's fragile," I said. That's not really a lie. He then picked up the box and asked me if it was frozen. I felt my Operation Send Dead Animal was becoming less and less covert with every dreaded question. As soon as my money hit the table, I shot out the door like a shoplifter who had just finished stuffing loot down her pants.

So now we wait. Meanwhile, I can't bear to put poor Sweet Pea in the run by herself. Until we get the results back, she will be hanging with the goats. They seem to get along, though the goats insist on eating the chicken food and jumping inside the coop. Sweet Pea tolerates their poor manners, if only for the sake of companionship. 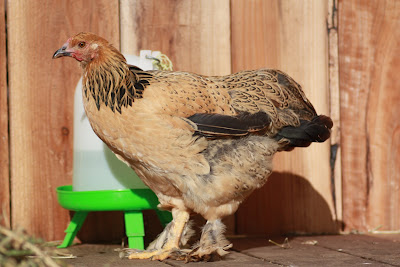 Well not exactly. But I did get a little bit of press from SFSU's newspaper Golden Gate [X]press. Take a look (it's titled "Urban chickens a growing Bay Area trend"): 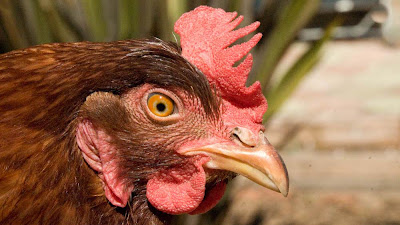 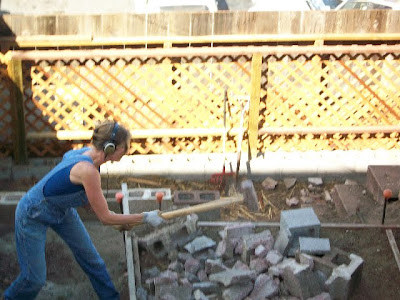 Am I not one bad ass bitch with my sledgehammer? Look how my muscles are like... rippling and stuff. This is me making a desperate, futile attempt to finish the landscaping in the backyard before the rains come. Oops! I guess it's a little too late for that after the huge storm passed through the Bay Area this week. *sigh*

So now I'm faced with a bit of a dilemma; should I reuse all of those cinder blocks to build my last two retaining walls or should I bite the bullet and purchase those lock in place bricks? I've decided to go with the latter. I really really really wanted to recycle all of those cinder blocks from the original retaining wall that sat smack dab in the middle of the yard. That poor wall has been scrabbling to hold back half the yard on a slope that descends at least 14 feet from the back door to the base of the yard. I painstakingly took the wall down block by block with the intention of building two smaller walls. But here's the problem; to make those walls strong enough to withstand the pressure of the earth behind them, we would need to build a solid base, mortar them together, fill the holes with concrete, and maybe stick in some rebar. The walls would definitely need to be tied in to the existing side retaining walls (we've got a 20 foot one to the west of us. I know, totally crazy!). That's a lot of work and would probably take me 2 weeks or more.

Well we certainly don't have that kind of time anymore to complete the project. The rains are upon us and if we don't act soon, our entire backyard will be washed down into the used car lot that sits directly behind us. Supposedly, I can build a retaining wall with those lock in place thingy-mi-jigs in a day. Wow, that works for me and it sure beats pouring concrete. I won't be reusing, but at least I'll have the place ready for the fruit trees that will be coming in January and I'll be able to plant some fall/winter vegetables. A fabulous perk to living in this area is that things grow pretty much year round. A downside to using these bricks is that I will lose 18 inches in the length of the yard. What's the big deal you ask? That's 37.5 square feet! Do you know how many plants I could cram into an area like that? That's the size of an entire garden bed!

And I had such big dreams for those drab, prison-like concrete blocks! I was going to mosaic both walls with some ocean motifs. The farm was going to have animals, plants, trees, and art all living together in one enchanting, harmonious, utopian splendor! These grand fancies for our tiny plot of earth no bigger than a double wide trailer are now left to rot with all the other dashed dreams... like having chickens that live! *sigh*

Anyone need a bunch of cinder blocks? Well, you know where to find them.
Posted by Heidi at 9:34 PM No comments: 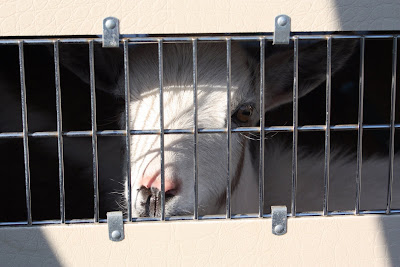 Last week we found ourselves at the Cotati Large Animal Hospital... again. It seems that the ladies are perfecting some escape artist antics that they've been working on. Ethel has been struggling to nudge past me at the gate and during one instance in which I blocked her from a new life on the lam, she lost her footing on the deck and poked her eye on one of the stairs. I didn't notice anything was wrong until a couple days later when she was having difficulty keeping her eye open and was laying around in the igloo. I also saw that the iris of her injured eye was cloudy. I made an emergency appointment with the vet and north we schlepped.

We didn't see our usual vet as she was off castrating sheep. Instead, we saw Dr. Harlan who gave Ethel a thorough going over at my request. She seemed to have contracted the same cough that Lucy had and I was concerned about pneumonia, a potential problem with goats of this age. Aside from her messed up eye, she was running a fever and had a bit of rattling in her lungs. The doc loaded her up with all kinds of meds: a super strong antibiotic called Exceed, a triple antibiotic steroid boosted eye ointment, and another round of Naselgen. The docs up at Cotati Large Animal seem to be really jazzed about the latter, having given both goats a dose on their last visit and again at this one. I could swear I saw a strange twinkle in Dr. Harlan's eye when he began to sing the beatitudes of this vaccine. He claims it's the bomb in preventing illness and uses it all the time with organic herds. His love affair with this little nasal spray struck me as a bit odd, but hey, to each his own. I, myself, am completely enamored with my totally energy inefficient Wedgewood stove for its ability to dehydrate anything, make yogurt, and sprout tomato seeds. So I don't judge.

I asked Dr. Harlan to check Lucy as well just to make sure her congestion wasn't lingering about. Her temp was normal, but she still had a bit of crud in the chest. We'll keep an eye on her. And since I had the doc there, I couldn't resist asking him about Lucy's very special body part. Lucy, you see, has a double teat and I wanted to know whether or not that would cause problems with milking. The doc said the extra teat had to go and that it would be a cheap and easy fix on a goat this young. He advised doing it now rather than later. I agreed, but was concerned that there wouldn't be enough time thinking that this would be a bit of a "procedure". OK, so the totality of this "procedure" involved me holding Lucy's front legs and vet assistant holding the rear, the vet taking a scissors of sorts and clipping off the adjunct teat, and then giving the fresh wound a good shot with a spray on bandage. Poor Lucy was so shocked by the pain that she jolted and then went completely stiff as if she had given up. Or maybe she was just doing her best imitation of a fainting goat.

Over the next couple days, Lucy was acting up, being a bit more goaty than usual. I suspect she was pissed about that lopping off the boobie thing. She would nibble at my clothes and shoes... while I was wearing them, of course. And she would make a break for the gate, which had never been part of her normal behavior in the past being the shy one of the two. And then last Thursday, I found her roaming around the yard outside of the goat pen. She was racing about, jumping on top of absolutely anything that was higher than a foot off the ground. I have no idea how she got out. Poor Ethel was left alone in the pen, bleating frantically for the return of her pal. Lucy seemed to be enjoying her freedom a little more than I would have liked to see. Looks like we better get a move on finishing the landscaping, otherwise the rains are going to wash all of our dirt piles down to Mission street and there will be goats running wild through the neighborhood. Oy vey!
Posted by Heidi at 9:01 PM No comments: