A couple of my ladies enjoying some of the recent sunshine. 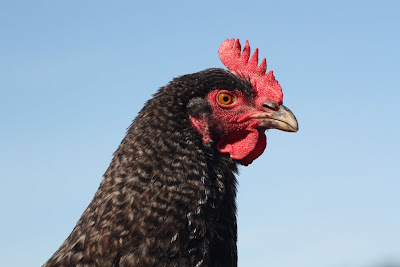 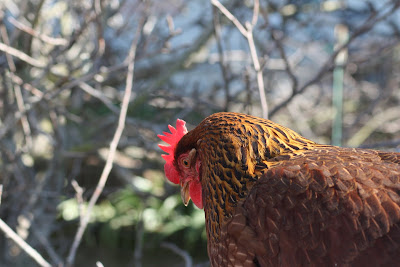 The Scourge of Scurs 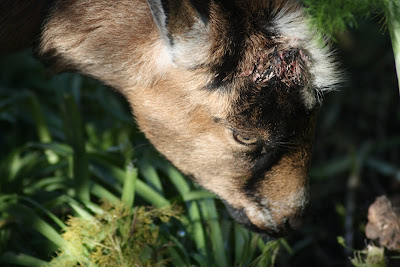 What? For those of you not in the know, scurs are little shards of horn that grow out when a goat hasn't been properly dis-budded. Huh? Dis-budding is the hideous, yet often necessary, procedure of taking a goat, two days fresh from the womb, placing her in a box with just her head poking out one end, and burning off her horn buds with a red hot iron. Not pretty. Regardless of whether or not dis-budding is humane, it is essential to have a hornless goat in an urban setting.

Lucy was most unfortunate to have not had her horn buds completely burned off. I'm not surprised. She's a feisty one when it comes to being poked and prodded. I'm sure she kicked up quite a fuss in that tiny torture chamber and, consequently, has bits of horn sprouting out both sides of her head, one side worse than the other. The problem with these horn bits is that they can curl back, growing into the goats head, or break off easily. In Lucy's case, the latter has temporarily resolved the former problem.

After lying in bed for 48 hours last week, struck down with a nasty case of food poisoning, I decided that a trip to the backyard for the animals' night time feeding would do me some good, what with a bit of fresh air and all. I entered the animal pen right at dusk, finding Lucy with a big bloody mess on her head. Upon closer inspection, I saw that she had ripped her horn off and that it was bleeding pretty good. I hate to admit that I panicked, but why should I lie? By now, you all know that's what I truly excel at. I had read that there are loads of blood vessels in the horns and that it is possible for a goat to bleed to death if the issue is not addressed immediately. As you can imagine, this was very bad news given my physical state. I rushed inside to get a towel to cut off the bleeding, doing a quick Internet search to see what the proper procedure would be in this situation. I found a lot of sites telling me "make sure your goat doesn't have horns because they can break off and cause problems." Yeah... thanks for that incredibly helpful tip.

I went back to the animal pen and attempted to subdue the bleeding by placing the towel over the broken horn. Well that went over about as well as a lead balloon. Mind you that I had ingested a mere six saltine crackers in the past two days and now found myself wrestling and being rolled by a 60 pound, really pissed off creature... in the dark. I "threw in the towel" so to speak and went for help. The Disgruntled Farmhand, to my utter relief, agreed to play vet on this evening, brought Lucy into the garage, trimmed off the hair around the horn, and applied a good deal of Betadine to the wound.

I was still worried that the bleeding didn't appear to be stopping, but lucky me, I've got an old high school classmate who is a vet. My friend Enita, a.k.a. Skeeter, runs the Tender Care Animal Hospital in Gretna, Nebraska and is kind enough to give me advice in these situations over Facebook (this social networking thing has proven to be way more useful than I had once thought), which is so amazingly helpful since we live 60 miles from the goats' vet. She told me to put some flour or baking soda on the wound to control the bleeding. So I went back outside and dumped a fistful of soda on Lucy's head. Now it is a bloody, cakey mess, but it worked and she is now on the mend. Within two days, she was back to her old tricks - head butting her buddy Ethel. Crazy goat! 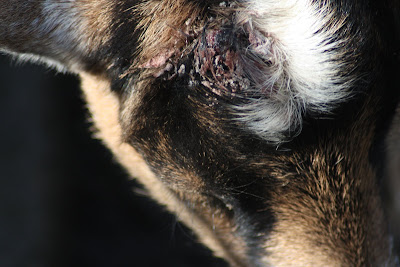 The Grass Is Always Greener 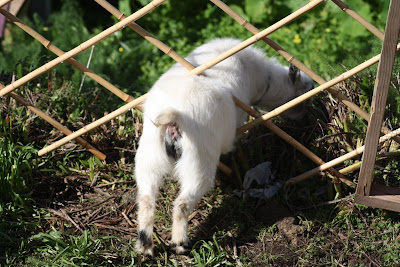 Guess THAT fence isn't working.
Posted by Heidi at 9:35 PM No comments:

A lot of them. A few weeks ago, we trekked down to Morro Bay for a bit of R & R and to pick up a mess of fruit trees, vines, and canes. Back in October, I placed an order with Trees of Antiquity, a nursery that specializes in rare, heirloom fruits and carries a fantastic selection of low chill varieties that do well in our cool summer coastal climate. Even though the trees weren't delivered until January, the beginning of fruit tree planting season around here, you have to get your order in early otherwise you might miss out on some of the more popular or harder to find items. I was a bit late with my order and consequently didn't get the pomegranate tree I wanted. But that's okay. It gave me an excuse to stop by Bay Laurel Nursery for a practically seedless, pale juice variety of pomegranate called "Eversweet".

This is the booty: 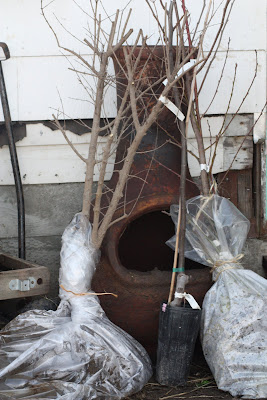 I know it doesn't look like much, but there are 10 types of fruit squished together in those bags: a White Tiger nectarine, Fuyu persimmon, Eversweet pomegranate (composing the majority of naked twigginess in the picture), Janice Seedless Kadota fig, Black Butte blackberry, Ollalieberry, Campbell Early grape, Black Emerald grape, and an O'Neal and Sharpblue blueberry.

You're probably wondering where in the hell I think I have room for all of these trees, bushes, and vines. It's a little thing called espalier, baby. That's right folks, I'm using the ancient European art of growing trees flat against a wall in order to maximize production and space. It was all the rage in the Middle Ages. I predict it will be the hottest new trend in gardening with this back to the land/urban farming movement. Right up there with the chicken.

Speaking of space, the goats are a touch bummed now that they've gotten the kibosh on free roaming throughout the yard during the day (they are in their pen at night). At first, I thought I could just block them from the baby trees with some bamboo trellises and deer netting, but those little buggers proved to be too determined for a taste of fresh buds to let mere plastic and a twig stronger than steel stand in their way. After several rousing games of "chase the goat" (damn, can those girls run fast!), in which I was repeatedly mocked by Ethel who would race over the blueberry barrels and grab a couple bites of leaves every time she passed, I decided to stockade them in a one-hour-to-build-it corral in my neighbor's backyard (more on my yard grabbing/theft to come in a future post). They have , of course, broken out twice, since the fencing is a bit dodgy and weak. But I think I've got it well jerry-rigged for the time being. Gotta keep one step ahead of those guys, otherwise I'll be shopping for fruit trees again next year.
Posted by Heidi at 1:21 PM 3 comments: